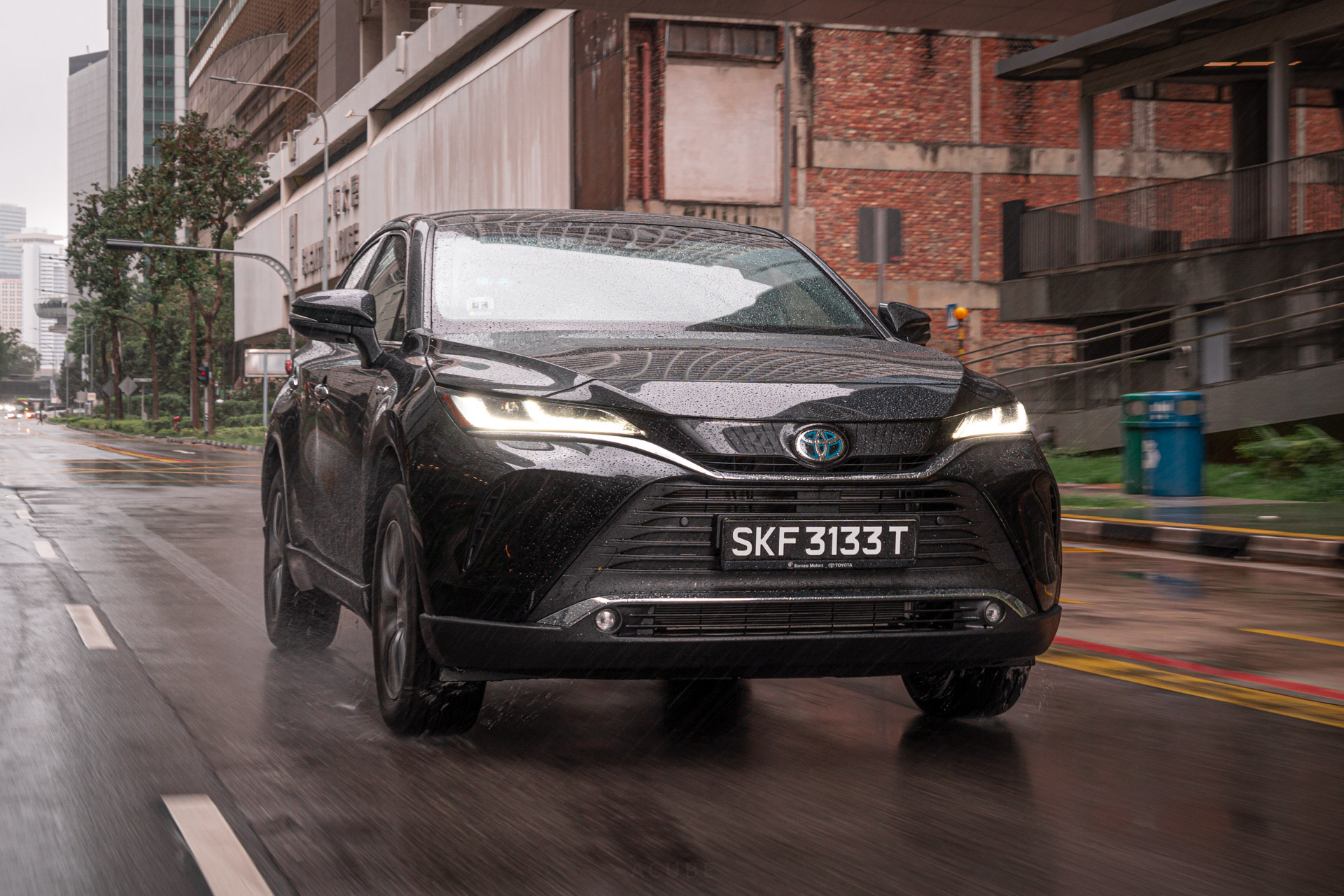 It wasn’t too long ago that buyers would only purchase the Toyota Harrier because they were unable to fork out the cash needed to land a Lexus RX on their drive.

But times have changed. This new Toyota Harrier, codenamed the XU80, is actually the second generation of a distinct Harrier line-up, replacing the XU60 of 2013 - 2020.

And for the better - the separation means that the Harrier is no longer a compromise for those after a luxury SUV but without the budget for it.

It has morphed into a well-built, properly thought-out and probably very reliable, crossover.

Actually, if you really think about it, the Toyota Harrier occupies a unique spot in the crossover market. You can’t necessarily benchmark it against more garden variety offerings, but neither can you put this up against the luxury SUVs that cost significantly more too. 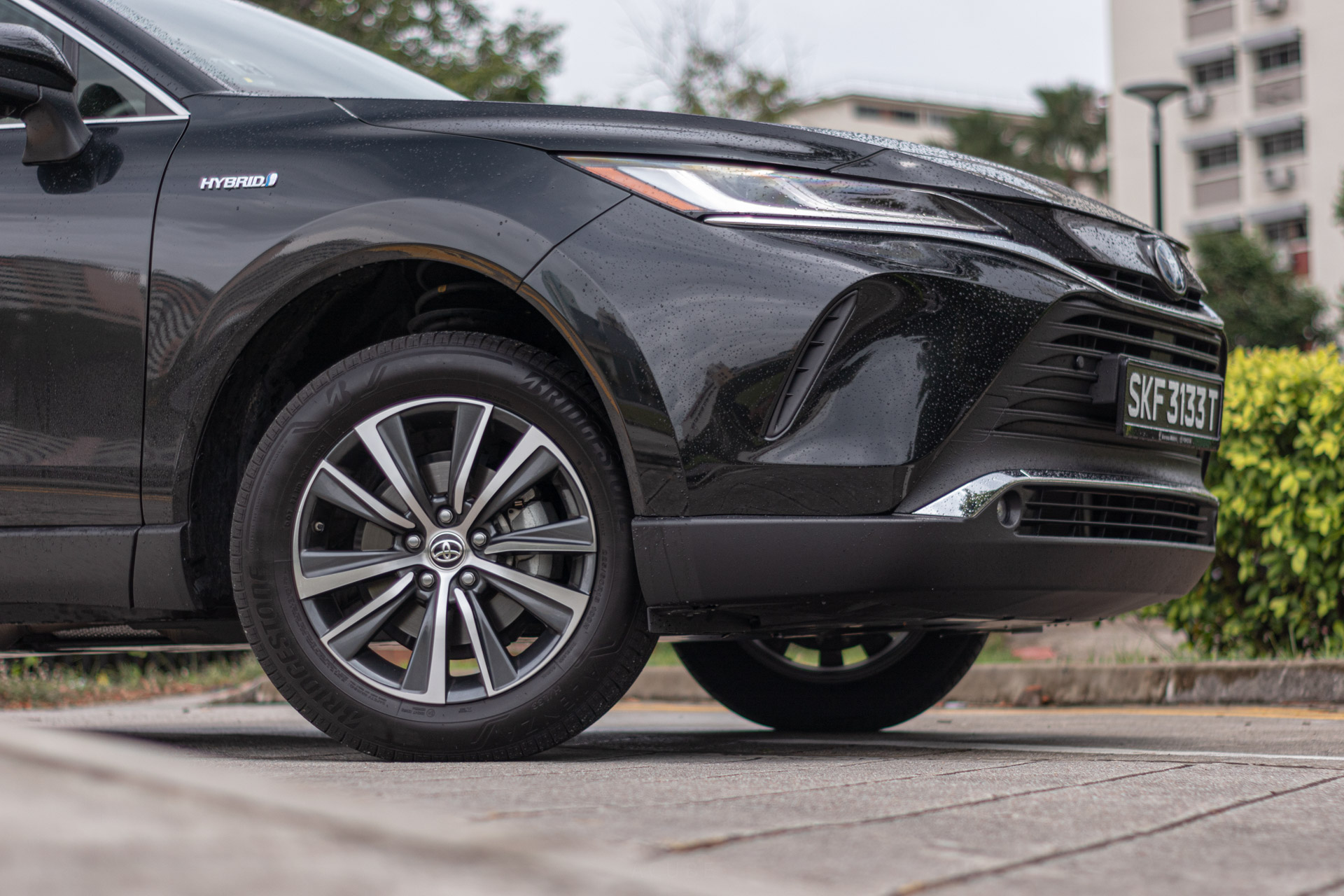 It may be in a sort of ‘crossover no-man’s land’, but it combines quality and equipment at a very palatable price, and is a compelling package that has carved a client base for itself.

The basic recipe for the XU80 goes a little like this - you take the outgoing XU60 Harrier, and then proceed to add a significant amount of spice to its exterior design. Still, the profile is very reminiscent of the XU60, but then again, there are only so many ways you can style an SUV. 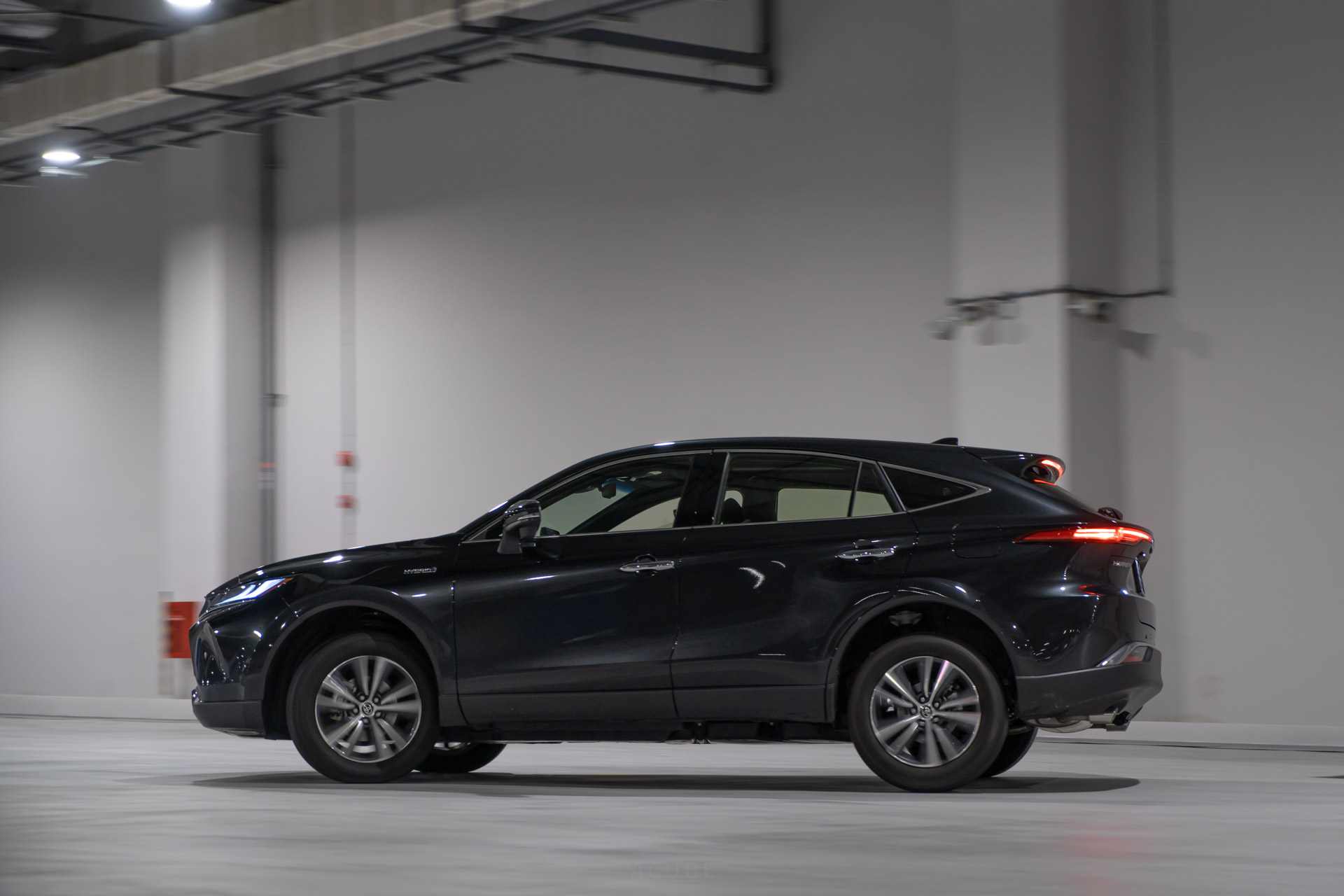 Where the new car has the stylistic edge is in the execution of the front and rear ends. The light clusters have shrunk, and are significantly swoopier than in its predecessor. A blanked off front grille connects the light clusters visually, with a chrome strip spanning the width of the car for emphasis. 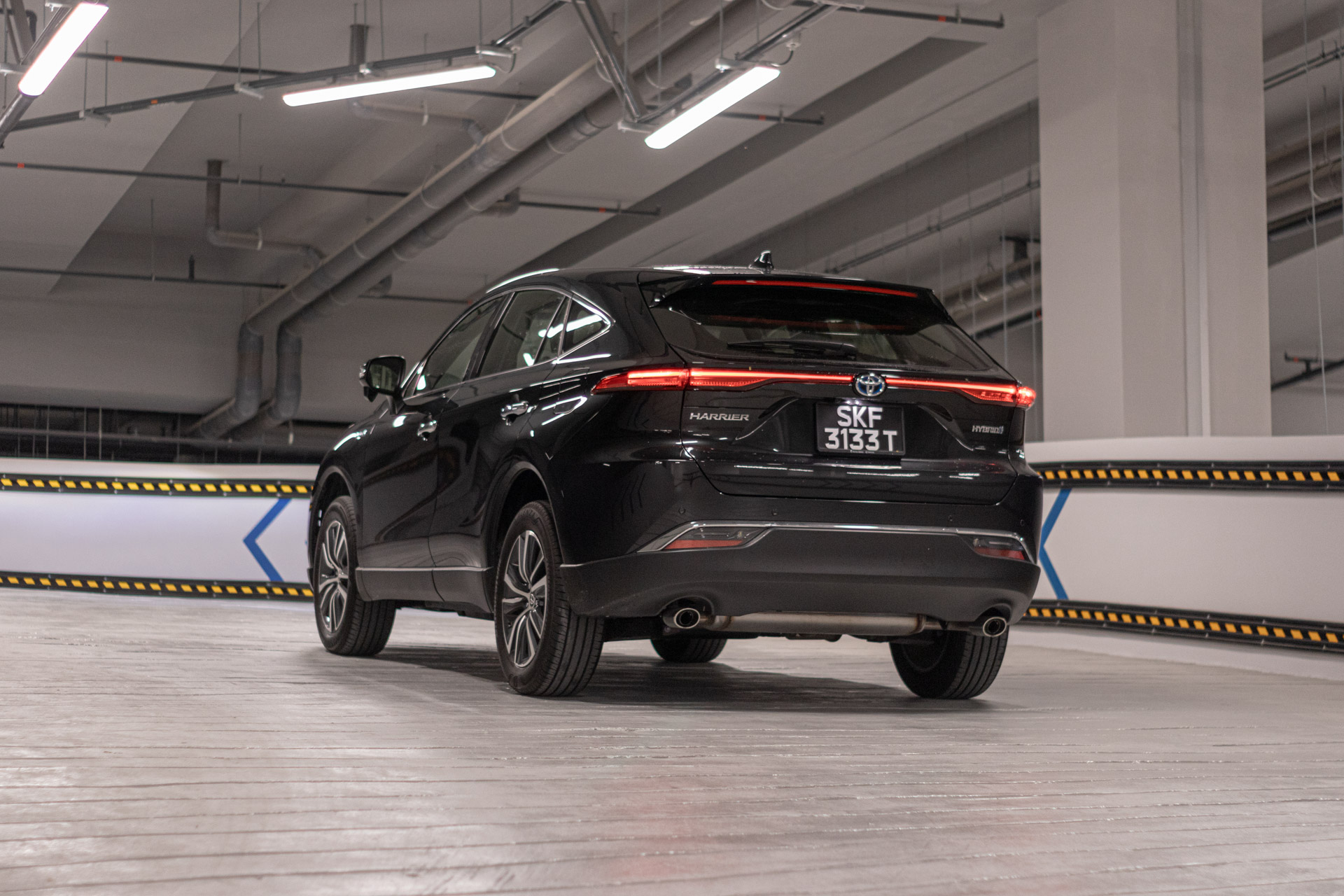 No big, ungainly brake lights here; the car has a sleek, pseudo light-bar running across the rear of the vehicle. To achieve this, the reverse lights have been shifted to separate lighting units mounted lower in the bumper. Again, a good move, as it removes some visual bulk from higher up in the vehicle.

This is one well-built car. Soft-touch plastics and leather grace the surfaces that you’ll regularly come into contact with. There are more brittle-feeling plastics, but this has been used in areas that are likely to receive a hammering from the shoes of clumsy occupants. 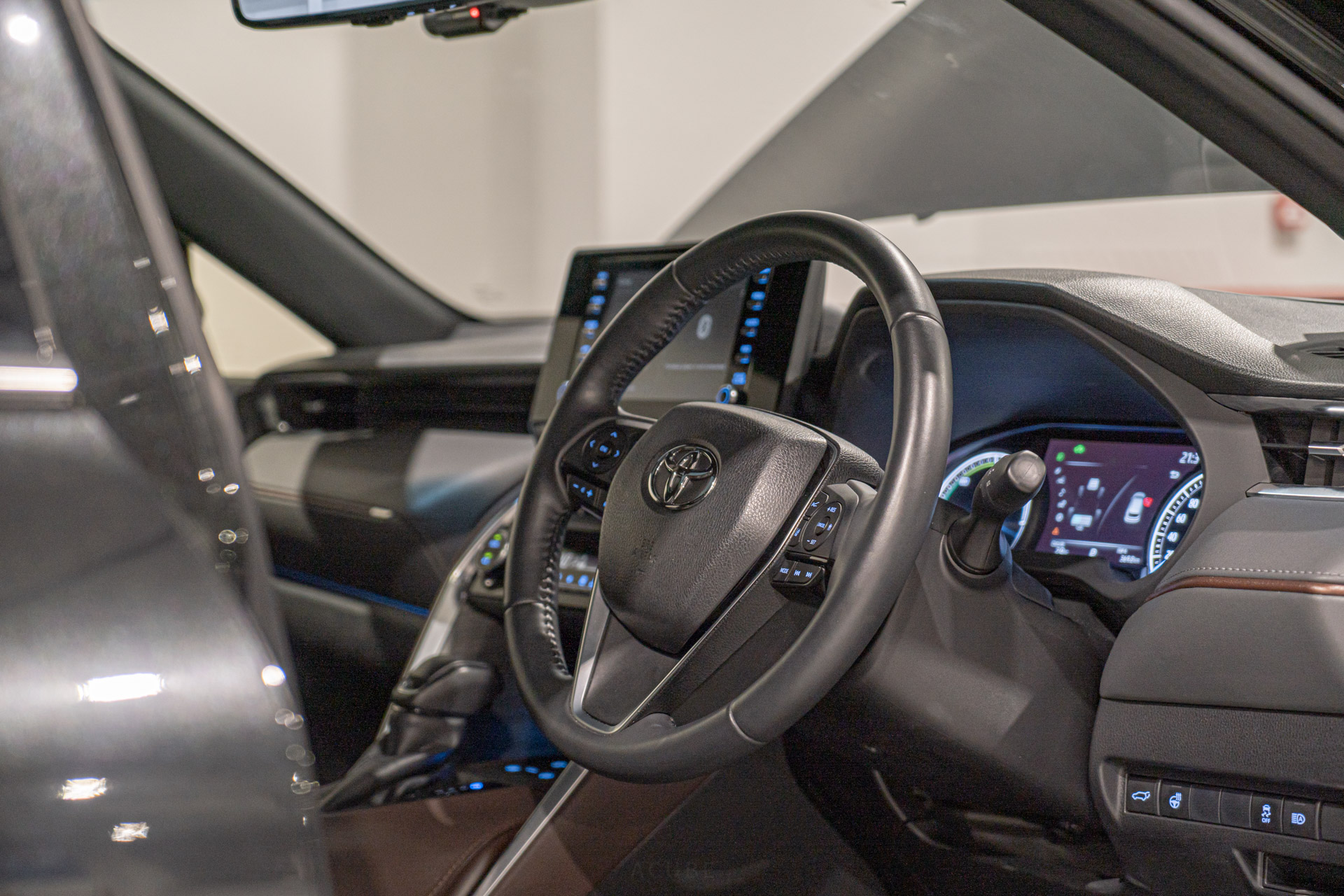 Space is in no short supply, both physical and perceived. With a panoramic moonroof made of a smart glass, you can toggle between keeping it clear and allowing more and harsher light to enter the cabin, or switch it to a frosted finish that only allows soft light to bathe the interior surfaces. 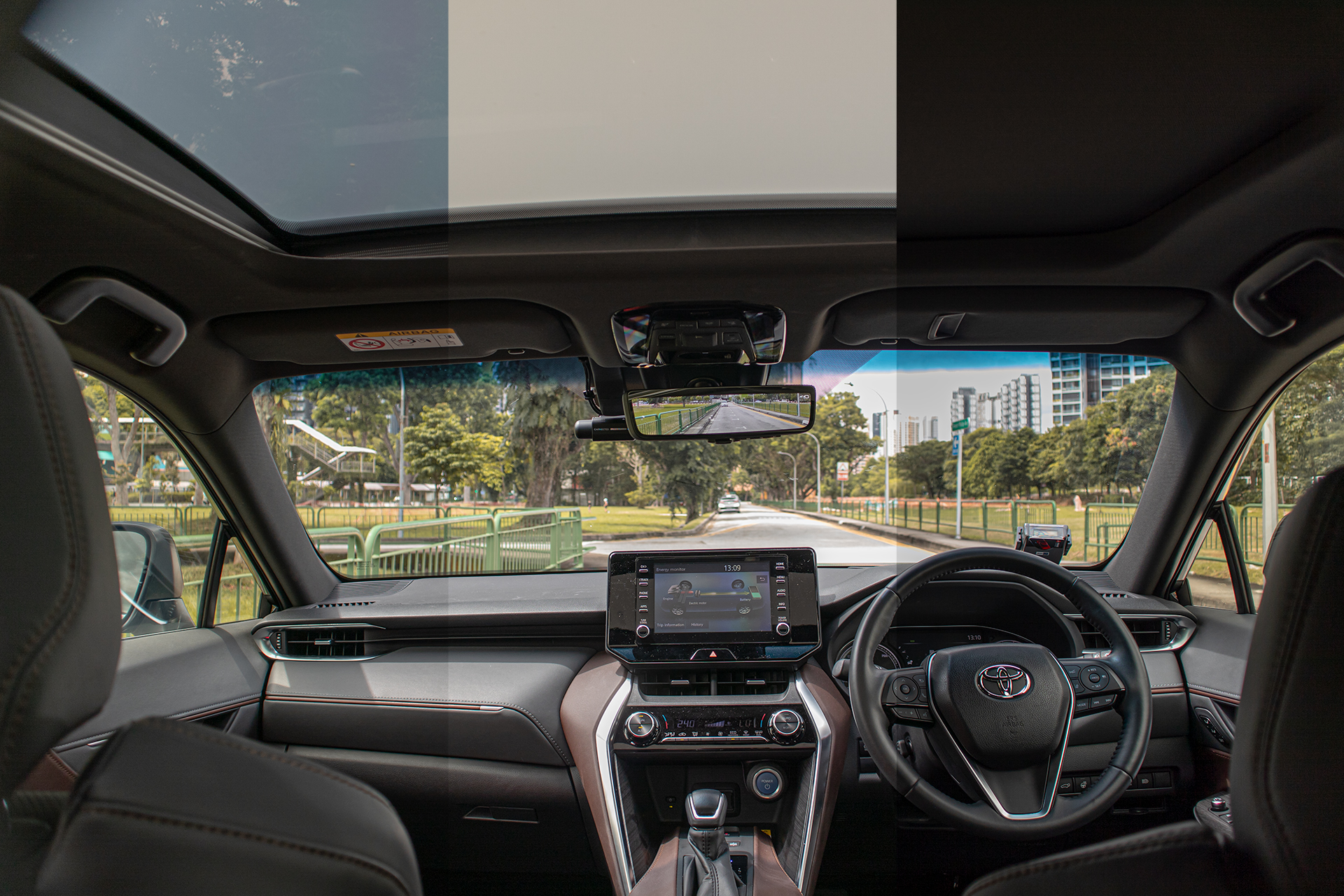 As for physical space, the car will comfortably swallow four adults and a generous helping of groceries (and a lot of camera gear!). And comfortable is not a misnomer in any way - the seats themselves are made of supple leather for optimal comfort even on longer journeys.

There’s dual-zone climate control in the car, but if you’d like even finer control of your core temperature, the car will pump heated or cooled air through the electrically-operated front seats. 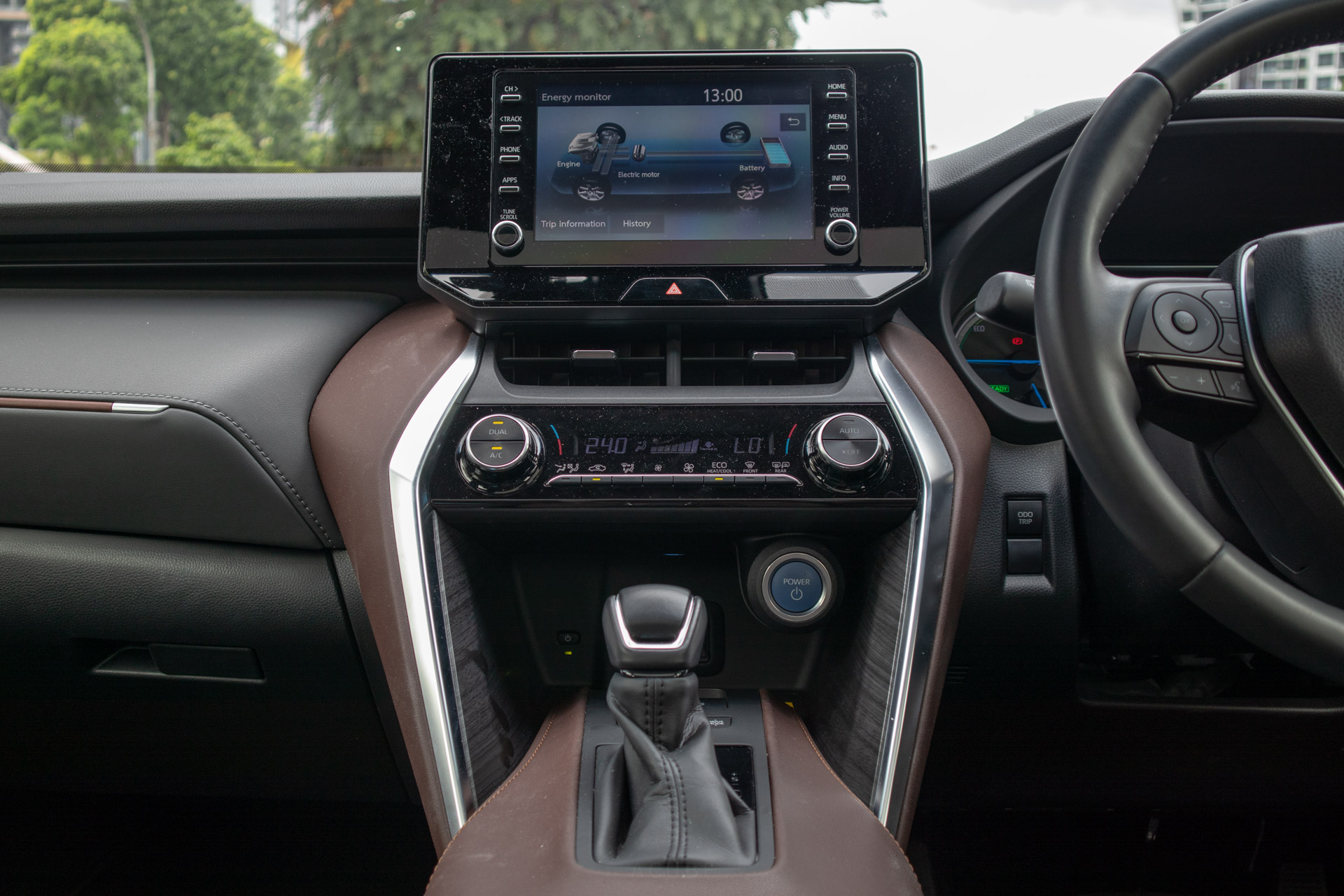 But it isn’t all hunky-dory inside. Whilst we have no issue with the analogue gauges (the central information screen in the cluster is large enough to disseminate all the necessary information about the vehicle), we question Toyota’s choice of still sticking to a double-DIN standard for the stereo.

Opting for a customised solution would greatly extend the stylistic relevance of the interior, as double-DIN head units continue to gradually be phased out.

It does not feel like an SUV from behind the wheel. Where you sit in relation to the rest of the bodyshell, and also in the way it conducts itself, the Harrier feels like a hatchback that has been properly scaled up.

You get all the perks of an SUV, with a high-riding position, with the good visibility of a hatchback. The best way to sum up the experience behind the wheel is with an oxymoron - it feels more grown-up but less mature. 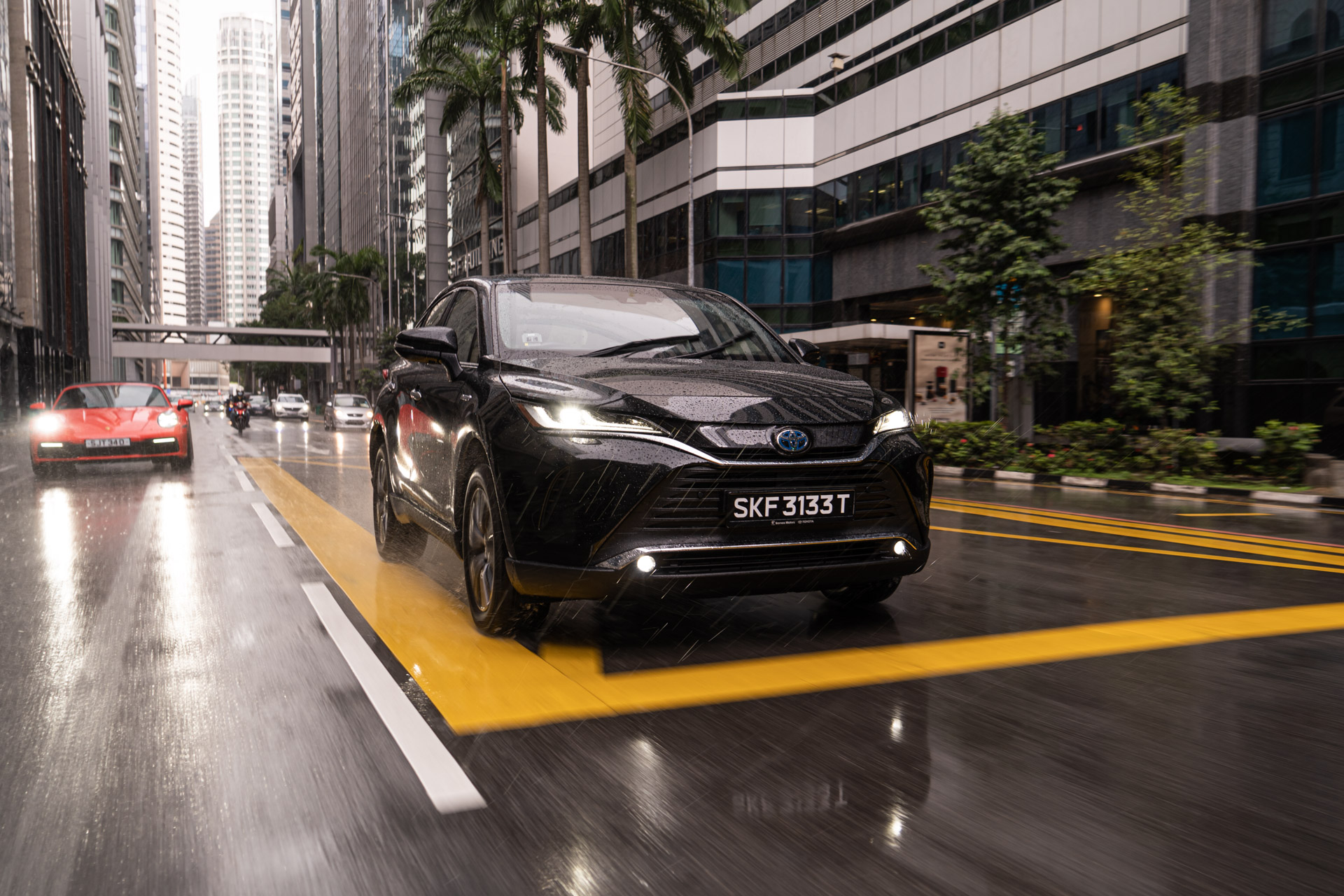 First, the ‘more grown-up’ part of the equation. As it no longer serves as a pared-down Lexus RX, it has since morphed into a very competent SUV, with plush materials and an excellent build quality for an experience that we’d dare deem as luxurious - especially considering what you’re paying for it!

It will serve you and your family well, as a comfortable and spacious family car. 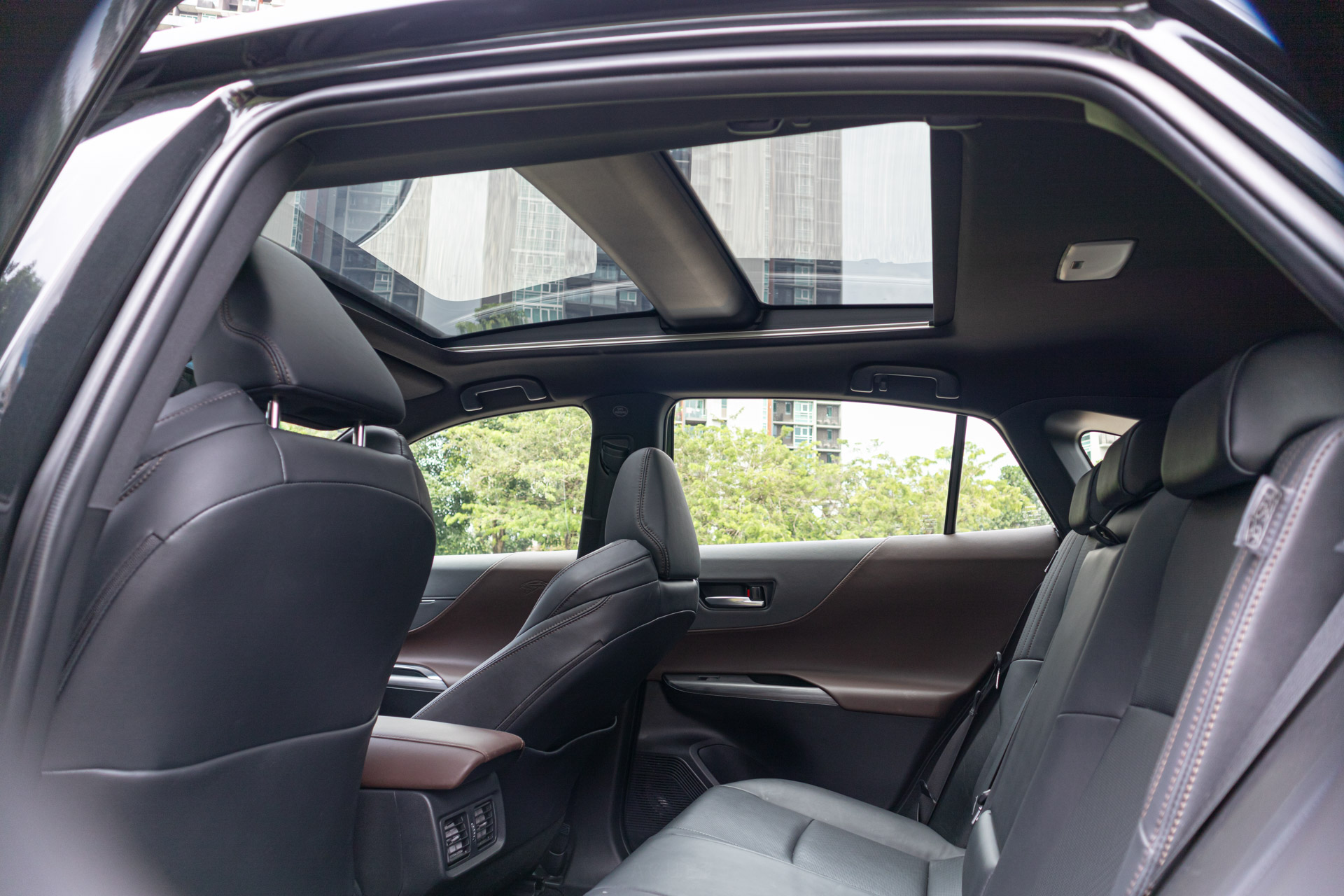 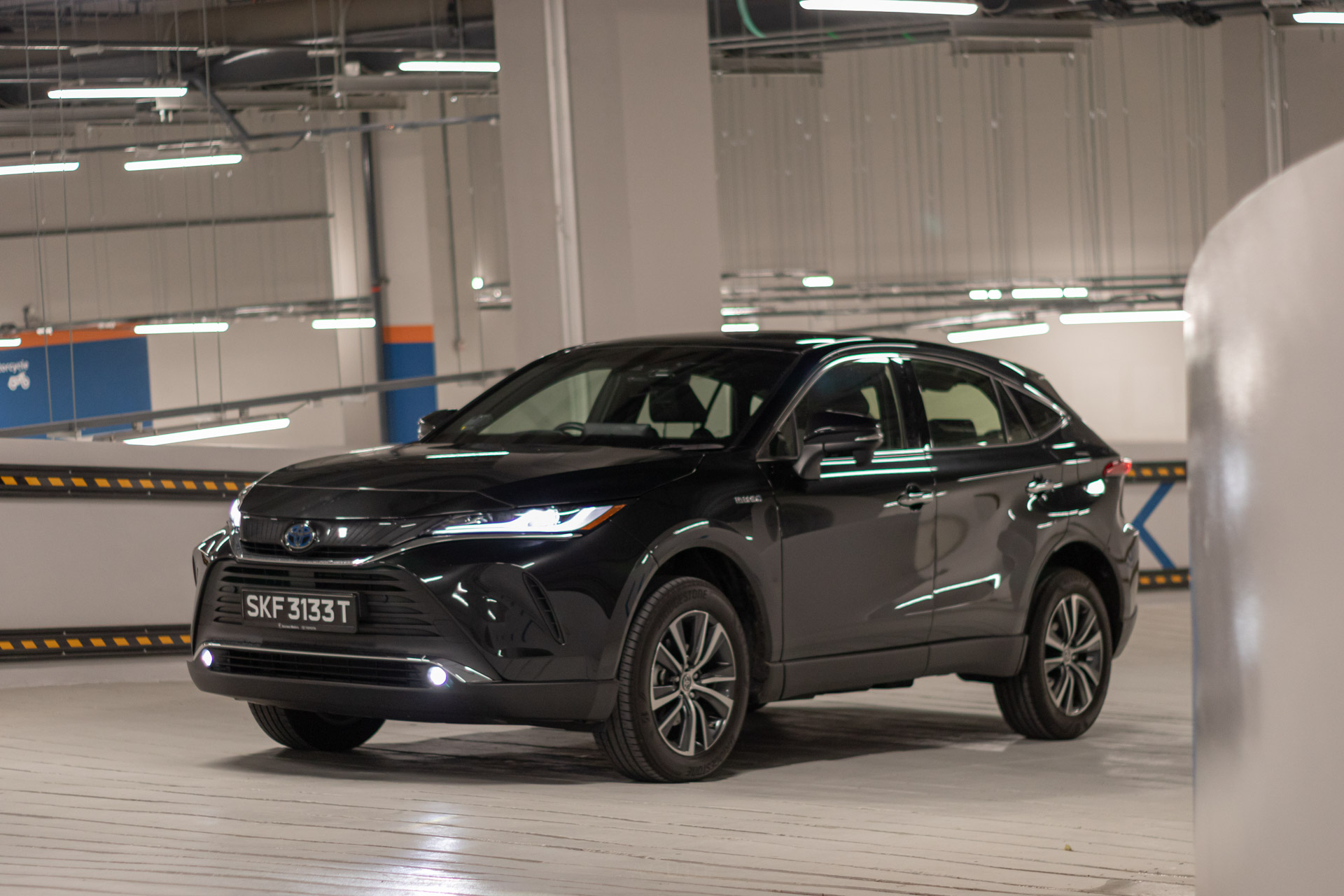 This is probably why despite the lineage of its transmission, we did not feel that it detracted from the overall driving experience.  It isn’t constantly hunting for the right ratio - it chooses one ratio and sticks to it. When the engine is incapable of sustaining wheel speed in the selected combination, the electric motor seamlessly fills in the torque gap, giving you an experience that far betrays its 176bhp power figure.

Accelerative force and straight-line oomph (again scale your expectations appropriately - it is a hybrid crossover afterall) isn’t all that this car has going for it though.

We extensively tested the Harrier in Sport mode, and found that it actually gave you some decent feedback through the steering wheel. 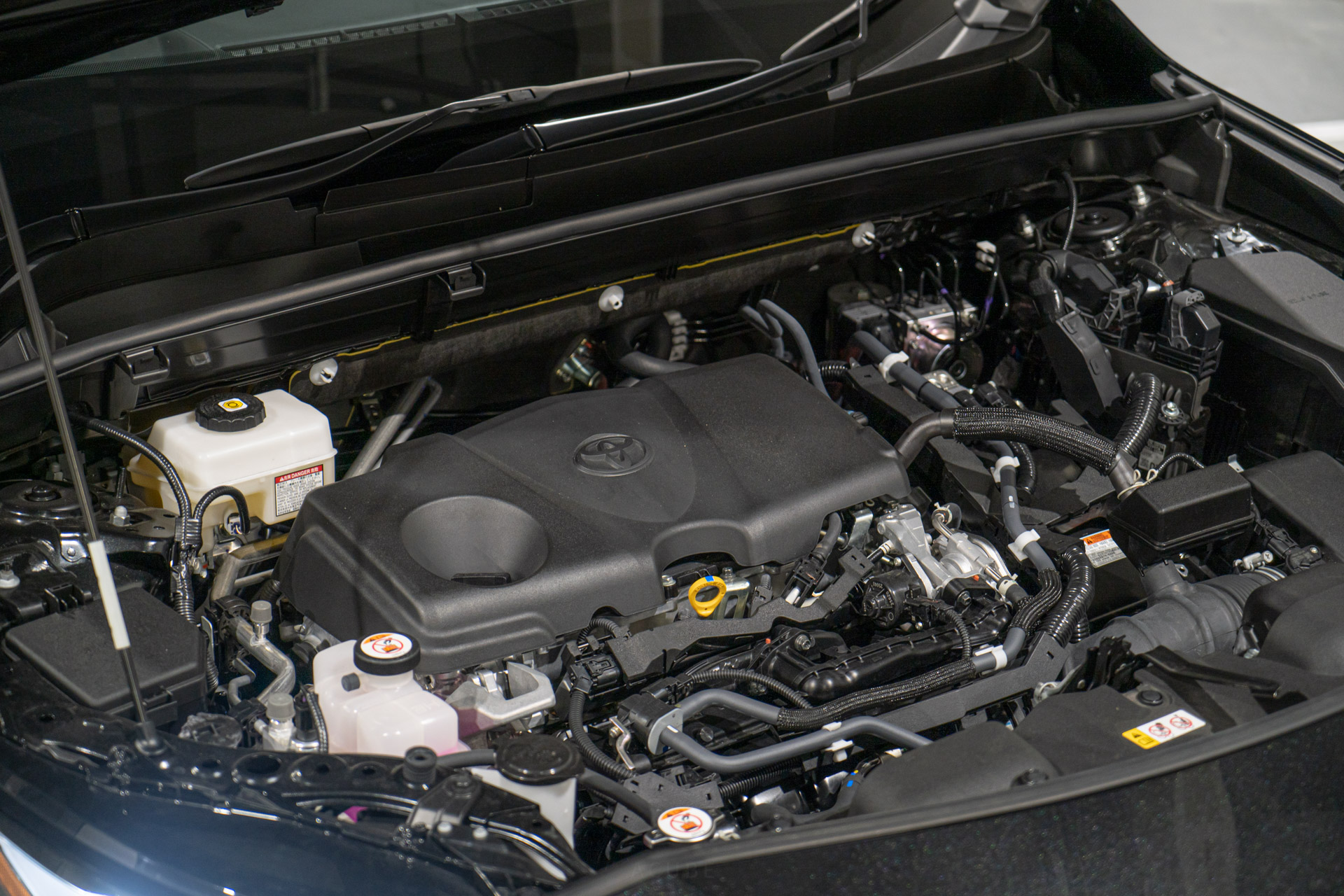 As evident in the upcoming photographs, we tested the car during our Northeast Monsoon season. With driver aids off and in the pouring rain, you can still carry some decent pace through a hard corner. The car is composed enough for us to not detect any significant instability from either the rear or front end.

These hybrids are not designed to operate for prolonged periods as a full EV - they are not very efficient in this regard. But still, in theory, the car is capable of full EV driving. 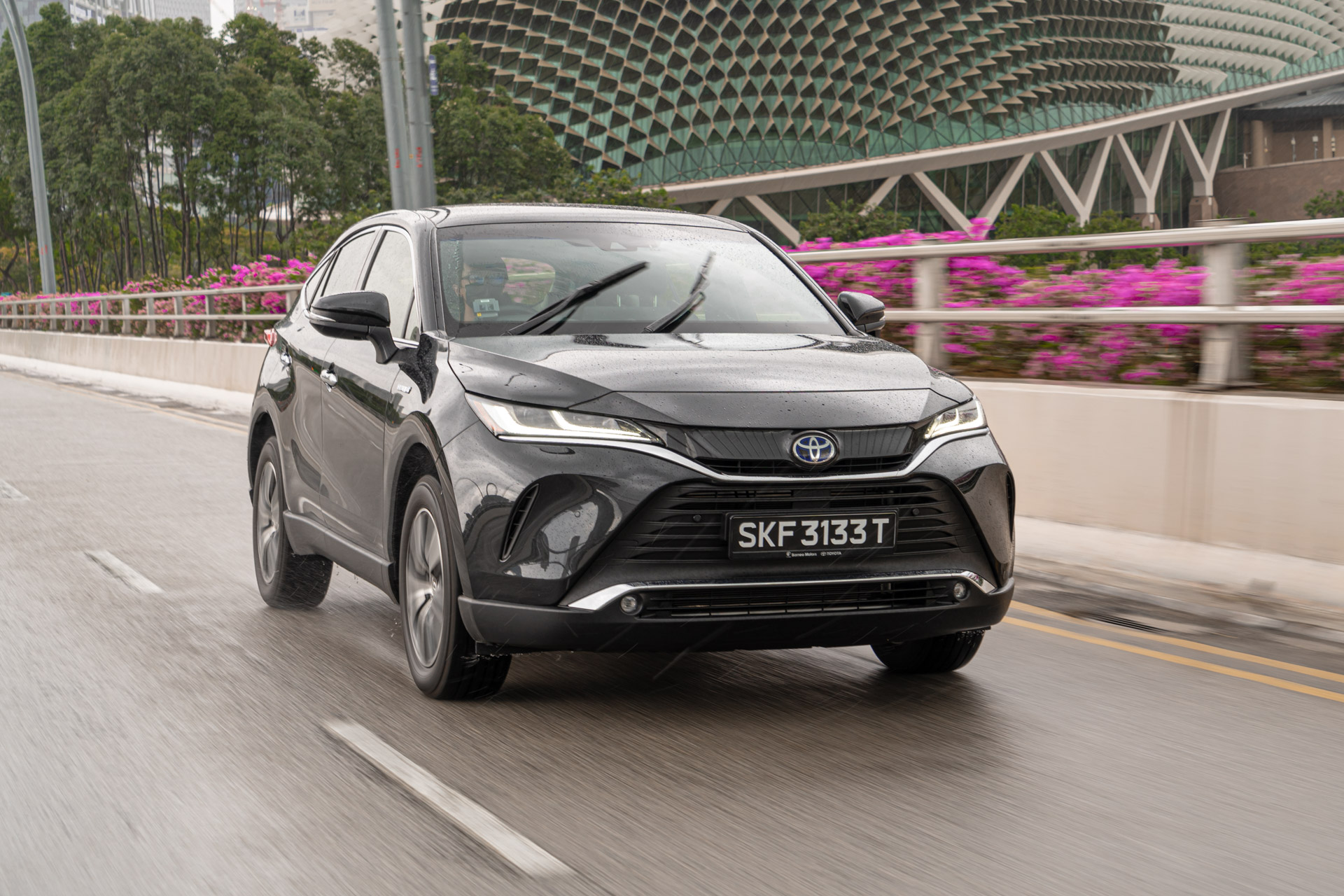 To keep it in pure electric mode, we had to really feather the throttle, accelerating to a top speed of 50km/h from a standstill in more than 10 seconds. In this scenario, our destination was around three kilometres from one of the exits of CTE. Impressively, the Harrier was able to complete the journey without burning a drop of fuel.

It also only used half of its battery capacity to cover that distance. Use it as it was intended though, and you'll find the car returns a very respectable 17km/l, a respectable figure if you understand the way we journos drive.

Not Just A Budget Lexus Anymore

The Harrier range may have started as a lower-cost alternative to the Lexus RX of its time, but the current generation car has morphed into something much greater than that. It is visually striking, has a well thought out cabin with plenty of space, and to top it all off, quality materials for a luxurious-feeling experience. 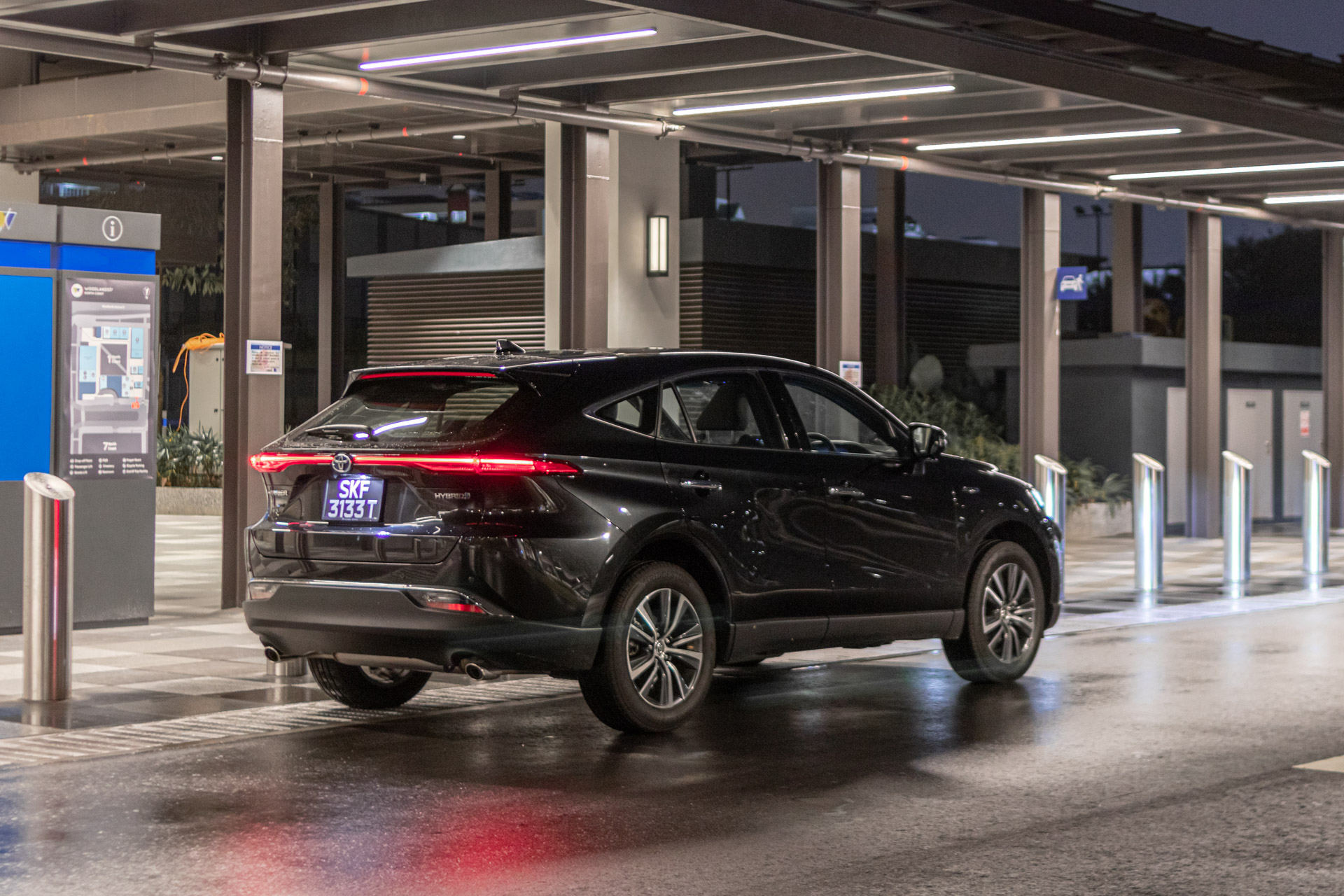 A mighty amazing feat, considering its Lexus stablemate costs much more. It really is a practical, spacious and affordable way to indulge yourself in your daily commutes!